Of Changes, Choices, and a Day of Infamy

It was sixty years ago this December 7 that a twenty year-old studio announcer named Sherman Feller stepped before the microphone of WMUR in Manchester, New Hampshire to deliver the stunning news that an American military base in Hawaii called Pearl Harbor was under attack.  As he later recalled, he had two thoughts at that moment.  One was “that this was quite an assignment for a kid making only twenty dollars a week.”  The other, more somber one, was that “my life and the lives of everyone I knew were about to change.”

We’ve all heard that last sentiment repeated often enough since our own “day of infamy” on September 11, but with just a few months experience we still are a long way from understanding the extent and nature of that change.  Which is why now is a good time to tell the story of Sherm Feller, and how he made the best of that difficult time and in so doing, created an entirely new form of entertainment that dominates the radio airwaves today.

Because of the attack, Sherm recalled, “the government decided to keep some key radio stations on all night so the Air Force and Navy would have a signal to hone in on any time of the day.”  Since Boston radio station WEEI would be one of those stations, an overnight announcer would be needed.  Sherm auditioned and got the job.  Now it was up to him to fill four hours of air time.  The answer, he realized, was in the myriad of theaters and nightclubs in Boston.  “You had the RKO Boston Theater, you had the Metropolitan Theater, you had the Tic Toc Cafe, the Coconut Grove, the Copley Plaza and the Ritz.  Now at the Copley Plaza Hoagy Carmichael would perform along with Ray Bolger.  That was the type of performer you had – very sophisticated.  We had a studio at the corner of Tremont and Boylston Street, right across from the Common.  And after their performance, which finished about twelve, they'd dance and drink and then they'd come up to my program to publicize that they were there.  I sat on a stool, smoked a cigar, and spoke for four hours.”

The list of performers who stopped by to chat, joke, sing and tell stories is a who's who of mid-twentieth century entertainment.  Tommy Dorsey, Nat King Cole, Stan Kenton, Don Rickles, Frank Sinatra, Totie Fields, and many other stars of the stage and screen made it a point to visit Sherm’s radio show.  Yet what made Sherm Feller's show a ground breaker were the hundreds of ordinary citizens who got their chance to speak on the air.  “Studio audiences would sometimes ask questions or else I'd take phone calls.  If I didn't have any guests that night I'd give the phone number and people would call.  Now back then, because of the regulations and the state of technology, you couldn't actually put phone calls on the air like they do now.  But I was the only one in town doing this so everybody listened.”

As radio moved from live performances to disc jockeys playing recorded music in the 1950s, Sherm could still be heard on his show playing the piano and sang any one of the thousand songs he has written (he had a Top-40 hit with his “Summertime, Summertime.”)  His proudest musical moment came when his “John Kennedy Symphony” was played by the Boston Pops at a birthday tribute to the late president.

But, to his confusion, Sherm’s fame came not from his pioneering of talk radio, or from his musical accomplishments.  A few years before his death, Sherm talked about the job he got in 1967 that brought him so much notoriety: “When people introduce me they always say 'Here's the public address announcer for the Red Sox,' which is about as much of an achievement as moving my automobile from the front of the building to the back. Anybody can do this.  What P.A. announcing requires is a love of the game because otherwise it would be a very boring thing.  The joke is, of course, that when my sister got my first check she said to me 'Do you know how you're doing?  You get twelve dollars a game and you take cabs there and back, which is seven dollars each way.'  I said, 'What does that mean?'  She says 'It means you're losing two dollars a game!'“

“You really can't justify losing two dollars a game,” Sherm said, shrugging his shoulders, “but if you really love the game...”

Sherm Feller was right sixty Decembers ago, when he thought his life and all American’s lives were going to change.  But out of that grim day, through a remarkable combination of talent and circumstance, came the nascent beginnings of talk radio, and the making of a reluctant New England legend.  It’s a story we should all remember as we try to imagine the changes that are still to come and the choices we all must make.

David Kruh is an author and playwright.

(Note: One of the great pleasures of maintaining this site is meeting people like David Kruh. I asked him how he became such a fan of baseball and Boston. GT)

How did I became a baseball fan?  Well, my dad was a Giants fan from the Bronx and my mom used to go to Ebbetts Field in her native Brooklyn to watch the Dodgers.  It was inevitable that I became a baseball fan, and since I was living on Long Island, a Mets fan (I never, ever considered being a Yankees fan.  Never.)  When I got to Boston in 1981, I become interested in Scollay Square (which had been torn down 20 years earlier) after hearing a story from my uncle, a former sailor and doctor who served during World War II (who had found himself with "liberty time" in Boston and subsequently sampled the wares in the Square.)  So I wrote a book on it.  I worked for several years for WRKO (when it first became talk) and then WEEI (when it first became sports talk) and then the Big Dig (I left l-o-n-g before the leaks started).  In 1997 I began work on a musical about the Red Sox, and in May, 2001 The Curse of the Bambino Musical premiered at Boston's Lyric Stage. 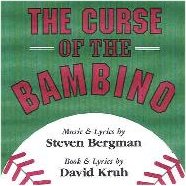